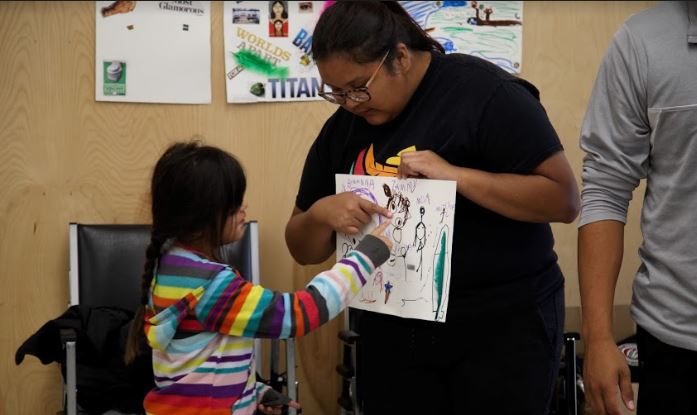 At just 16-years-old, Standing Bear Summer Student Racheal Cameron has always seen herself as a leader.

Hailing from the Dalles First Nation in the Kenora District, Cameron was the 2018 Standing Bear program’s youngest summer student — something she says she used to her advantage by being able to reach young people at their level.

“I think because I’m a youth, I connected better with them than an adult would because I understood them,” said Cameron. “I think it worked to our advantage and we got out some of the shyer kids because I was able to go make friends with them.”

Helping to facilitate successful camps in communities across the province, including Kenora and Rama, the 2017 North American Indigenous Games Team Ontario badminton alumni says she wants other Indigenous youth to be able to share in the opportunities that have been afforded to her.

“With my involvement working with these youth I kind of put myself in their shoes and I think, ‘How can I bring what I have to them?’” said Cameron. “When I go to places I’ll recognize youth that are really good at sport and then I want to connect them with people that can take them to the next level instead of having their skills stay on the reserve.”

Although still a high school student, Cameron says she feels a strong sense of responsibility to give back because she recognizes the impact being involved in a program like Standing Bear can have on the future of Indigenous youth across the province.

“I’m trying to get kids to beat the stereotypes so that they’ll go out and do some of the things that I’m doing. Just getting involved and trying to organize things in their communities to get other kids out.”

Cameron says the Standing Bear program is not only helping her to grow and develop as a leader and changing and affecting the lives of many of her peers but also helping to transform perceptions of Indigenous youth.

“I think the program is helping us grow,” said Cameron. “It’s helping people who don’t have lots of understanding of what’s happening on First Nations realize we’re equal and we’re here too and that we’re doing all the same things they can do. Even though we’re on reserve, we can still do it. We have the same skill sets.”

Standing Bear is a culturally grounded program developed by the Aboriginal Sport and Wellness Council of Ontario to strengthen individual and community wellness by empowering Indigenous youth in making positive change.