Indigenous Sport & Wellness Ontario will be hosting tryouts across the province of Ontario, in all regions, to select Indigenous athletes to represent Team Ontario at NAIG 2023, scheduled to take place in Kjipuktuk (Halifax), Dartmouth and Millbrook First Nation.

The NAIG are a multi-sport, multi-disciplinary event for Indigenous youth, between the ages of 13 and 19, from across North America (Turtle Island). NAIG 2023 will bring together 756 Indigenous Nations, and approximately 5,000 athletes, to celebrate, share and reconnect through sport and culture in Kjipuktuk (Halifax), Dartmouth and Millbrook First Nation. The Games will offer 15 contemporary sports competitions, three of which are traditional Indigenous sports, including box lacrosse, 3D archery and canoe/kayaking.

“We are thrilled to collaborate and connect with communities, coaches, volunteers, partners and families across all regions of Ontario to offer to as many Indigenous youth as possible, the opportunity to represent themselves and their community at what is considered the pinnacle of competitive sporting events for Indigenous youth in Turtle Island,” said Gary Lynch, Manager of Sport and Development at ISWO. “Tryouts for Team Ontario will take place in every region of the province and require tremendous planning and resources in an effort to reach as many communities as possible. With this aim, we hope to create a representative contingent showing the athletic excellence and sportsmanship of Ontario’s Indigenous youth.”

“At ISWO, we are honoured to select, coordinate and lead the Ontario contingent to compete at NAIG 2023,” said Marc Laliberte, President of ISWO and past Chef de Mission for Team Ontario. “I can say with conviction that NAIG is an incredibly special event. Youth across Turtle Island will have the chance to compete and connect with their peers through sport and culture. It’s always a daunting task to host tryouts that are accessible to youth and families across Ontario, as it’s such a large province, with so many remote and northern communities, and that’s why we’re trying so hard to level the playing field. So many of our youth have incredible talent, it’s amazing to see them tryout and compete, and open their eyes to new possibilities and pathways.”

Tryouts will take place throughout the year and into 2023. Additional tryouts for upcoming dates and locations will be posted on the ISWO website; please note that online registration is required to attend a tryout. For those youth unable to attend a tryout in person, an ‘online tryout application’ will be available via the My ISWO Portal. Online tryout applications require a tryout fee and will be assessed using the same guidelines and selection policies as in-person tryouts, by Team Ontario coaches and managers.

The NAIG was first held in 1990 in Edmonton, Alberta, and has been staged on nine other occasions since then, in various locations throughout Canada and the United States. Athletes competing in the NAIG must be born of North American Indigenous ancestry. All contingents participating in the North American Indigenous Games (NAIG) must represent the Indigenous Peoples of a Province/Territory in Canada, or a State/Region in the United States of America. Only athletes registered with a contingent are eligible to compete in the NAIG. The NAIG is governed by the NAIG Council, the International Governing Body for the NAIG exercising exclusive jurisdiction, either directly or through its affiliate members or committees, over all matters pertaining to the Games. 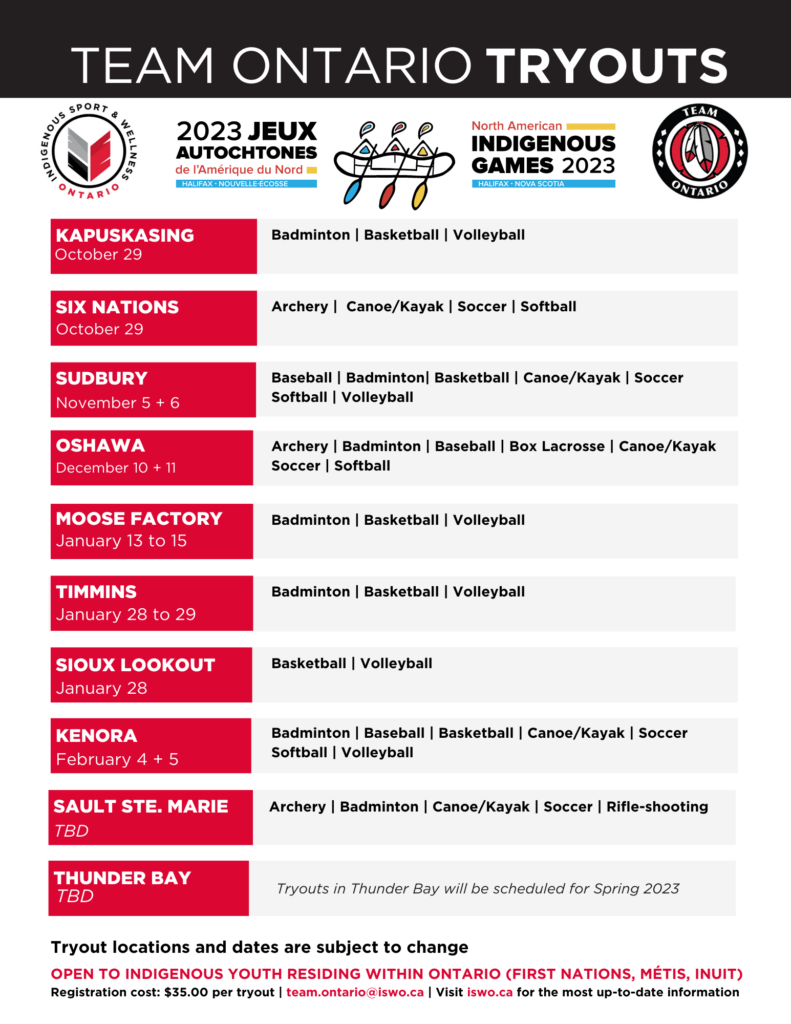